Paris: The Man on the Train 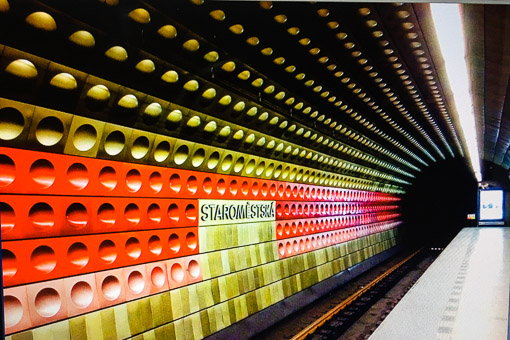 His eyes were wild. He was clutching a Bible with a white knuckled fist while beating it on his chest. His mouth was wet with white froth forming in the corners of his thin lips. With passionate abandon he addressed everyone … no it was much more like scolding; something between a sermon and an urgent warning of something horrifying that is about to happen. I did not understand as it were in French, but I well understood fully that we are all guilty and an accomplice in some unforgivable sin. His appearance was short, he then moved on to the next part of the train to capture the next crowd  with equal vehemence.

The Metro is the most organised funfair ever. It transports about 4.5 million people every day and is already more than a century old. Each station has a different look – it alternates between semblances of dark-and-dodgy to brightly-tiled-and-glitzy. The trains are also different. Some of them are completely open, meaning that the compartments aren’t partitioned, and this is my favourite type. You can stand right at the front and look towards the back and see how the train swings its tail gracefully as it navigates through the winding tunnels. The trains are brightly lit inside, but the tunnels are pitch dark for the most part, except for some bright and colourful splatters of light that catches your eyes as you flash by. When you arrive at stations it is at high speed – suddenly the train will apply its brakes with such force and urgency, you can actually feel how they are clinging to the railway tracks as you hear the screeching sounds. At this stage everyone inside the train is propelled into the same direction, and with equal rhythm and grace everybody finds a secure footing again as the bullet-like train is forced to come to a complete halt.

The doors slide open with a shuddering sound and it is then that people steadily stream out and a fresh bundle mounts the train. There is a lovely peaceful atmosphere in the corridors and on the train – sometimes you hear the sounds of a trumpet or a saxophone, a violin, a flute or an accordion. People move in pairs or groups but mostly on their own. Some people are on their cell phones, others read, and the rest of us look at each other, sometimes with empty stares, but also sometimes with acknowledgement and an almost-smile that nearly, but not quite, tugs at the corners of your mouth.

We use cookies to ensure that we give you the best experience on our website. If you continue to use this site we will assume that you are happy with it.Ok